Misogyny is Revisionism Part 3: In Defense of Feminism 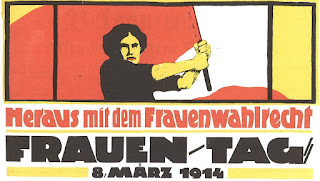 Feminism has become the staple bête noire for many on the left today. It has become fashionable for many self-proclaimed communists to denounce feminism as either bourgeois, a form of identity politics, or both. Many of these assertions rest on deliberate misreadings of the giants of Marxist feminism, as well as more superficial semantic arguments. And no more strain of feminism is more thoroughly thrashed and maligned by the so-called “woke” left than radical feminism, which is denounced on the above assertions to an even more vicious and ridiculous degree. The reality is that feminism is not only compatible with Marxism, but is indispensable to Marxism. Without the liberation of women, there can be no successful socialist revolution. Lenin famously stated that “There cannot be, nor is there nor will there ever be real ‘freedom’ as long as there is no freedom for women from the privileges which the law grants to men, as long as there is no freedom for the workers from the yoke of capital, and no freedom for the toiling peasants from the yoke of the capitalists, landlords and merchants.”[1] But for the crude class reductionists who worship at the altar of workerism this point falls on intentionally deaf ears. While the first two parts in this series were more theory-focused, this final chapter is more polemical than theoretical, aiming to re-affirm the indispensability of feminism to the revolutionary socialist project.

The claim that feminism is bourgeois was first popularized by the International Communist League, more popularly known as the Spartacist League, famous for their “revolutionary” defense of rapist filmmaker Roman Polanski, and the sex club NAMBLA.[2] The equally noxious Socialist Equality Party, also famous for its defense of rapists, as well as snitch-jacketing against “Stalinist spies”, similarly denounce feminism as bourgeois. Both organizations claim they support not feminism, but “women’s liberation”. While these two sects are not very influential in of themselves on the left as a whole, their anti-feminist, pro-“women’s liberation” line has been picked up by many so-called leftists, mostly men. To justify these positions, Alexandra Kollontai’s The Social Basis of the Woman Question is cited, but what these arguments miss is that Kollontai was not denouncing feminism as a whole, but bourgeois feminism. Kollontai, along with her contemporaries Rosa Luxemburg and Clara Zetkin, pushed for the radicalization and evolution of feminism; just as communism represented the culmination of Enlightenment radicalism, they sought to create a feminism that would represent the ideological pinnacle of the struggle for women’s liberation, as well as a guide to action for working class women. What these revolutionary women made recognized was that while there are issues that unite all women, cross-class collaborationism will ultimately hurt the feminist cause, not advance it, because the bourgeois feminists will ultimately side with their economic class. This is very different from a totalistic denunciation of feminism as an ideology. All this talk of “women’s liberation not feminism” is just semantic obfuscation; what it really does is disguise the discomfort many leftist men feel surrounding a revolutionary movement exclusively for women. These revolutionary women did not theorize, organize, and agitate to make men feel more comfortable, but liberate international proletariat, especially the working women of the world.

The other charge that feminism is a form of identity politics is another example of this kind of disingenuous semantic and ideological obfuscation. As discussed in the first part of this series, woman is not an identity, but a material state of being. In The Origin of the Family, Private Property, and the State, Engels explained how the advent of private property and its concentration in male hands, led to the domination of women by men for the purpose of exploiting their reproductive labor so that property could be passed down from the father to the son. Patriarchy and class exist in a symbiosis with one another, the one impossible without the other. And capitalism, despite allowing women to make some gains, still needs to maintain control of women’s reproductive labor to ensure the continuation of the proletarian class. Patriarchy also serves the function of giving working class men an “outlet” for their aggression; rather than directing their rage at the system that exploits them, they are encouraged to direct their rage at women. But again, this is not because woman is an “identity”. A large part of this rage men direct at women is sexual exploitation; prostitution, pornography, sexual slavery. (See Part 2 for a more detailed exploration of the sexual exploitation of women by patriarchy and capitalism.) Female biology, the state of being female, and of having a female body is inseparable from this oppression and exploitation. Thomas Sankara said of this double oppression of women:

“Women’s fate is bound up with that of an exploited male. However, this solidarity must not blind us in looking at the specific situation faced by womenfolk in our society. It is true that the woman worker and simple man are exploited economically, but the worker wife is also condemned further to silence by her worker husband. This is the same method used by men to dominate other men! The idea was crafted that certain men, by virtue of their family origin and birth, or by ‘divine rights’, were superior to others.”[3]

Being born female is a life sentence to, at “best”, second class citizenship, and, at worst, a life full of the worst kind of slavery and exploitation. Women make up not a class, but a caste; it is possible to move out of the class one belongs to, but caste is something one is born into and can never escape. Feminism aims at the emancipation of the female caste; it is not some kind of abstract identitarian movement. We must ask, would those who denounce feminism as identity politics also say the same thing about black liberation, or national liberation movements? Certainly some will, but one has to suspect these would be a minority. If anything, the cult of the ideal “worker” worshipped by the class reductionist left is an example of actual identity politics, the way it fetishizes and elevates a kind of archetypal industrial worker as being the symbol of the working class. This kind of crude class reductionism poses a far greater danger to the left than feminism ever can, even if feminism were an example of “identity politics”. Again, these denunciations serve more to conceal the discomfort of leftist men than anything else. Working class men, and leftist men are still men, and unless they actively combat patriarchal-capitalist socialization, they are going to be doing more to support the status quo than the revolution. If solidarity with working class women cannot persuade them to support the feminist movement, then perhaps they ought to support it as it is ultimately in their interest to do so. Like the racist white worker who thinks himself superior to his black comrade, capitalism will not hesitate to sacrifice the chauvinist male worker on the pyre of profit and accumulation.

“To me the Cultural Revolution seems a continuation of the Revolution: a means to make it go deeper so that it didn’t get caught in the bureaucracy and complacency that sets in once power is won militarily and a new group of people—including opportunists in the revolutionary movement itself—have a stake in creating the new status quo. It’s a continuation of the process by which the masses of working people, including women and minorities, take total political, economic and social power. It’s the next step to achieving real communism; that is, a society completely devoid of class, including that of sex and race. We considered sexism and racism more than just a tradition of behavior or a bad or ignorant habit. Being materialists (in the Marxist sense), we asked, ‘Who benefits?’”[4]

Other radical feminists like Shulamith Firestone and Andrea Dworkin sought to apply dialectical materialism exclusively to understanding the oppression and exploitation faced by women. Rather than giving into “biological determinism”, or “sexual fascism”, as their critics claimed, and still claim, they built upon the work of Engels, Kollontai, and others and deepened it; their analyses did for patriarchy what Marx did for capitalism. We owe much of the newfound understanding of pre-patriarchal human society, and “lost” women’s history to their diligent analysis and research. The radical feminist frustration with much of the left was not, and should not be considered an expression of anti-leftist sentiment, but understood for what it really was, a deep-seated frustration with the chauvinism and entitlement exhibited by many male leftists, as well as the domination of leftist groups by these men, and the way women in these groups were very often silenced and abused (something that still happens today, as shown by the rape “scandals” in the UK Socialist Workers Party, and in the Australian section of the Committee for a Workers’ International). And just like Marx is constantly subjected to ridiculous attacks by people who have never read him, so are the radical feminists (the erroneous claim that Dworkin said “all sex is rape” is one of the most popular of these distortions). Except radical feminists are not just being attacked by the right, the way Marx is, but also by the left. What it really shows is that the more direct an attack on existing power structures is, the more wildly insane and savage the counter-attack.

At the end of the day, anti-feminist “leftists” simply betray an utter lack of understanding of both revolutionary socialist theory and practice. Every revolutionary socialist has recognized that for the revolution to succeed, women need to be mass mobilized; even after the socialist republic has been established, this mobilization must continue and deepen for socialism to take root and flourish. Women are more than decoration for the socialist revolution, they must be active participants in every aspect of building the socialist society. Mao and Castro were especially astute at recognizing this; both China (at least until the Dengist era) and Cuba have been active proponents of women’s liberation in all spheres of society. Marx himself said, “Anybody who knows anything of history knows that great social changes are impossible without the feminine ferment. Social progress can be measured exactly by the social position of the fair sex…”[5] This statement can and should also be applied to socialist organizations; the most effective socialist groups are the ones in which women are not just active at every level, but equal and valued contributors to the organization’s development and practice. Those “socialists” who disregard, undervalue, or outright reject feminism do so at their own peril.
[1] Lenin, VI. "Soviet Power and the Status of Women." Marxist Internet Archive. Marxist Internet Archive, 2002. Web. 06 July 2017.
[2] "Feminism vs. Marxism: Origins of the Conflict." International Communist League (Fourth International). Women and Revolution, 10 June 2011. Web. 06 July 2017. The "Spart's" key anti-feminist manifesto.
[3] Sankara, Thomas. "7 Thomas Sankara Quotes about Women." MsAfropolitan. N.p., 25 Nov. 2011. Web. 06 July 2017.
[4] Hanisch, Carol. "Impact of the Chinese Cultural Revolution on the Women's Liberation Movement." Carolhanisch.org. Carol Hanisch, 1996. Web. 06 July 2017.
[5] Marx: Letters to Dr Kugelmann, Marxist Lib. 17 (NY, International Pub., 1934), letter of December 12, 1868, p.83.
Posted by Unknown at 6:32 AM

An examination of current and historical political, philosophic, social, and economic issues from a revolutionary socialist perspective.